Some of the most dedicated Ukrainian fans of the world’s most visually fascinating art festival, Burning Man, will likely skip it this year. The reason? They don’t have to travel all the way to Black Rock Desert in Nevada anymore to experience the festival’s atmosphere.

The “burners,” as they refer to themselves, have created their own Burning Man enclave in Kyiv called Kurenivka Palace of Culture.

The palace opened on May 11 with a huge party. Later, it will serve as a platform to create and present art — and its work will be based around the foundational ideas of Burning Man.

Other than that, Kurenivka will become a meet-up spot for Ukrainian burners and those willing to learn from their culture.

“We’ve built a home for our community,” Yaroslav Korets, 36, the founder of Kurenivka, told the Kyiv Post.

Korets, who is an information technology entrepreneur and a four-time burner, has gone from enjoying the festival himself to bringing his friends there and, then, to spreading the event’s culture in Ukraine.

He says that it is his way of giving back to the community that introduced him to burners.

According to the Kurenivka founder, there are around 1,000 Ukrainians who have been to Burning Man in Nevada and even more who love the culture and hope to visit the desert festival one day.

Led by Korets, Ukrainian burners have held several parties in Kyiv over the last year. Yet, it wasn’t enough for people booming with ideas.

“The idea (to open an art space) came naturally because of people: they needed a place to create,” Korets said.

The burners didn’t have to go far to pick a name for their “home” in Ukraine — they have already used it before. At the last Burning Man in 2018, Ukrainians set up a camp called Kurenivka, a reference to the Ukrainian word “kurin,” a unit of measure used by Ukraine’s Zaporizhian Cossacks to outline administrative districts of the Zaporizhian Sich in the 16–18 centuries.

The Kurenivka Palace of Culture is located in the huge 1,200-square-meter building of a former automobile repair shop in Kyiv’s most artsy Podil district. Kurenivka is also the name of a nearby neighborhood of Kyiv.

The Ukrainian burners found a place for the art space through their acquaintances: the owners of the building have fallen for their culture and now they are part of the community, Korets said.

“We rent the (building) but on very favorable terms,” he said.

Until recently, the neglected automobile repair shop was in very poor condition. But the burners weren’t afraid of complicated renovations since they had quite the experience setting up a city in the middle of the desert. And some of the Burning Man principles, such as collective work and participation, came in handy here.

There are only participants, no spectators,” reads one of Kurenivka’s 11 principles, which are inspired by the Burning Man’s principles.

Over the course of two months, a group of 300 volunteers worked to bring the abandoned building back to life. That was “quite an anthill,” Korets said, referring to the number of workers.

The volunteers did all kinds of work at Kurenivka: they cleaned, painted, cooked and even constructed stairs and made washbasins.
“We have a motto that ‘it’s not your job, it’s just your turn.’”

Kurenivka has no commercial aim, which is why it has nothing to offer to investors. For that reason, it is financed through crowdfunding the community launched over two months before the event’s opening. All the tools and materials needed for renovations were bought with people’s donations, which varied from Hr 50 (roughly $2) to Hr 30,000 ($1,130), Korets said.

The event also charged for tickets to the opening party to close up gaps in the budget. 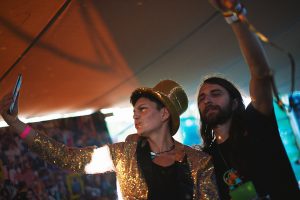 The Kurenivka housewarming lasted all day on May 11 and late into the night. It wasn’t just a celebration, but also a work and leisure event at the same time: the community members were finishing setting up different areas and artworks as they were circulating through the space in bizarre outfits sipping alcohol.

Just like any new home, Kurenivka is still a bit underequipped, so over 1,300 attendees flocked to the opening bringing potted plants, alcohol and food as gifts. They were following another principle of Burning Man — gifting.

“The value of a gift is unconditional,” the principle reads.

“The magic of a gift is that you do not demand anything in return,” Oleksandr Ovsianko, 38, a three-time burner who leads a construction company and is also a member of Kurenivka’s board of directors, told the Kyiv Post.

All the drinks and dishes at the opening were given out for free, just like at Burning Man, where nothing is allowed to be sold.

There were numerous lounge and dance zones located in tents mounted all around the Kurenivka building. From the inside, they resembled the ones in the Black Rock Desert with one little exception: there were concrete floors instead of sand.

The housewarming party had a busy entertainment schedule throughout the day: music shows and art performances all happened throughout the premises, and the event concluded with a fire show and a party at night.

Even though there was an abundance of art work, nearly every attendee was a work of art. Following another principle — radical self-expression — the burners were wearing artsy outfits made of leather, feathers, colorful leggings, offbeat cloaks and headdresses. Many were dressed as mythical creatures, historic figures or animals.

“I have a feeling that we managed to bring a piece of (Burning Man) here,” Ovsianko said.

But not all the principles were followed perfectly. The “leave no trace” concept, which means leaving the festival locations in better condition than it was before, was neglected by many, presumably those who have never seen the way the Black Rock Desert looks after the festival is over.

But Korets says that, at Burning Man, it usually takes newbies time to adapt, and the visitors to Kurenivka didn’t have enough time to do that. So it’s a challenge for the community to educate people and continue spreading their culture, he added.

An essential part of Kurenivka’s mission is to create a platform for making art. The event’s opening served as a starting point.

Both experienced artists and first-time creators presented their wall paintings and installations of all sizes as Kurenivka opened its doors.

One of the most popular art installations was a huge head sculpture with an internal museum showing how ideas are generated in people’s minds. The sculpture was created by local digital creative agency ISD Group as a way to celebrate their 15-year anniversary.

The agency’s founder Viktor Shkurba, 37, says that all the other platforms they referred to set limits on their concept, which is why they chose to create it at Kurenivka, where the culture of openness gives people an opportunity to express themselves in any way with no boundaries.

The museum, which was titled “Inside the head of Vitya (Shkurba),” was a result of both artistic creativity and modern technologies.

The interactive museum offers visitors the opportunity to experience how the human mind works. It was reminiscent of a computer game, as all the rooms were equipped with displays and tablets.

“Everything cool happening in the world now is at the intersection of technology and art,” Shkurba told the Kyiv Post.

After its launch, Kurenivka is switching to work mode to continue its mission. The art space will soon set up workshops and will later host residents who will be able to use the space and all the provided materials to create new art. The residents will be charged a symbolic fee of Hr 500 ($19).

And Kurenivka’s main hall will serve as a place to present this art, as well as to hold music shows and parties.

Korets says that Kurenivka is all about self-expression, which is why they hope to bring together Kyiv’s creative class.

“The point of this space is for people from different spheres to communicate, unite and create,” he said.